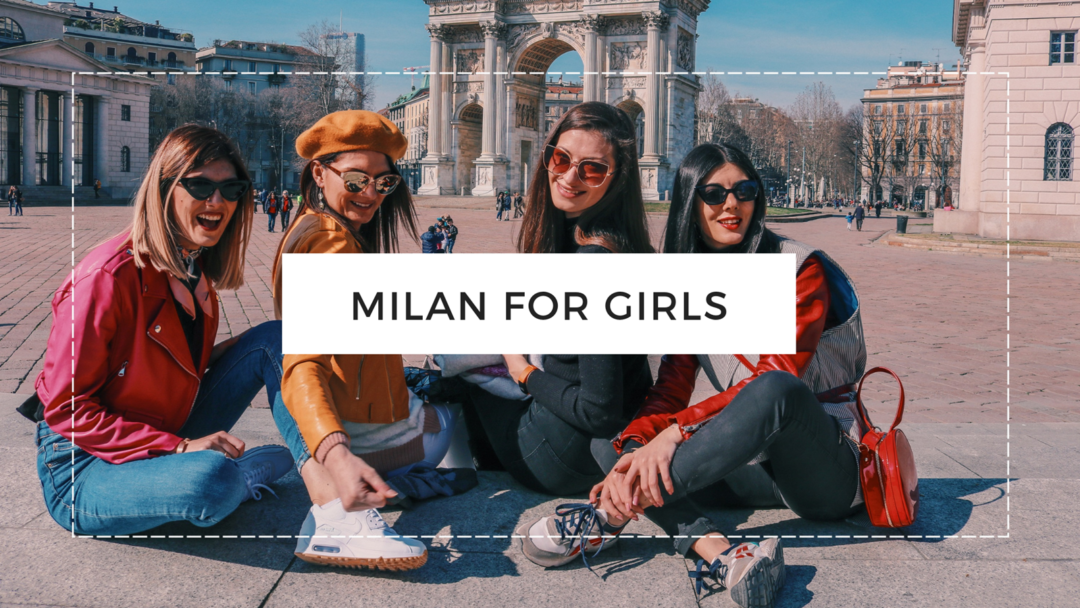 If you follow me on Instagram, you’ve probably already seen my photos and stories from Milan and you’ve read a little about my besties. We’ve been thinking for a long time about going somewhere together, and I really don’t know why we waited so long. We booked the flight tickets quickly and chose an apartment. I expected that such a girly trip would be like the tale of the Swan, the Pike, and the Crab, but it actually wasn’t like that. We gathered the day before the flight to make a plan, which at the end we almost didn’t follow, but we did much more fun things.

We traveled with WIZZ and the two-way ticket was € 30 (or € 20 with WIZZ Discount Club). We made a mistake by buying tickets separately so our seats were away from each other, but for the next trip, we will make one reservation for all of us. We traveled for about an hour by bus from the airport to Central train station in Milan, and the two-way ticket was € 13. From the metro station, we bought 48-hour passes (€ 8.25) for all public transport lines. There are also 24-hour passes for € 4.50.

We stayed at Bocconi Hintown House, and it’s not a surprise that we chose it because of the low price and the instagramable interior. The description says it is a loft, but it is actually a basement studio with two levels. The studio was bright and spacious, and the only minus I could think of was that there was no hairdryer, as it was in the apartment description. The location of the apartment was very good, near a metro station and a 20-minute walk from the Duomo. Before we arrived, we considered as a minus and the remote reception, but the defect ultimately turned out to be an effect because we had time for a good walk in the area. Where did we eat:

When you travel to Italy, food is an important element of the whole experience, so we even had a plan for eating. In the evenings, we chose restaurants in interesting areas, such as Navigli and Brera, where we had pizzas and pasta. One evening we decided only to have a glass of prosecco without any food, but we accidentally found a new opening restaurant and got a bonus – a free delicious treat. In the mornings, we had croissants, sandwiches, and cappuccino in small non-tourist cafes recommended by the locals. What did we see there:

We arrived in Milan in the morning and the check-in time at the reception had to be after 14:00, so we left the luggage there and decided to use of the remaining time till check-in for a walk in the area.

Our first stop was the Sforza Castle, which was built in the 15th century by Francesco Sforza on the ruins of an older fortress. Today, there are museums and galleries, and the gardens are great for photos. Next to the palace is the Sempione Park, where we took a short stroll to get to the Arc of Peace. Our plan was to have a pizza nearby, but there were no free tables, so we took food from the supermarket and ate near the arch.

In the evening, we decided to have a walk around the canals in the Navigli area. The place is very charming and peaceful, and the sunsets are very beautiful. The canals are surrounded by many cozy cafés and restaurants, art studios and small wine shops. Day 2 was rainy, so we decided to use it for a walk in Fondazione Prada. Thank you, Terry, for insisting to go there! Fondazione Prada was a unique experience, and I will tell you more soon in a separate blog post.

The next morning we had breakfast and went directly to the top attractions of Milan – Duomo and Galleria Vittorio Emanuele. We walked through the Museo del Novecento, where we enjoyed 20th-century art, various audiovisual installations, and a beautiful panoramic view of the Duomo from the top floor.

We used the last night for a walk in the Brera area, which is something like a historic center of Milan and has a very artistic and bohemian atmosphere. What we didn’t, but we had to:

We didn’t make it to the Brera Gallery, which is home to more than 600 pieces of art from the period from 14th to the 20th century. We couldn’t see The Last Supper by Leonardo da Vinci, as pre-registration is required at least a month or two earlier. But the thing I feel most pity about is that we didn’t drink coffee at the bar in Fondazione Prada, which is designed by Wes Anderson.

Milan is a really affordable destination, so we will certainly visit again and any the additional tips and recommendations are more than welcome in the comments below. A PLACE FOR STYLE, INSPIRATIONS, BEAUTY, LIFESTYLE AND MORE...

THANK YOU FOR READING MY BLOG!